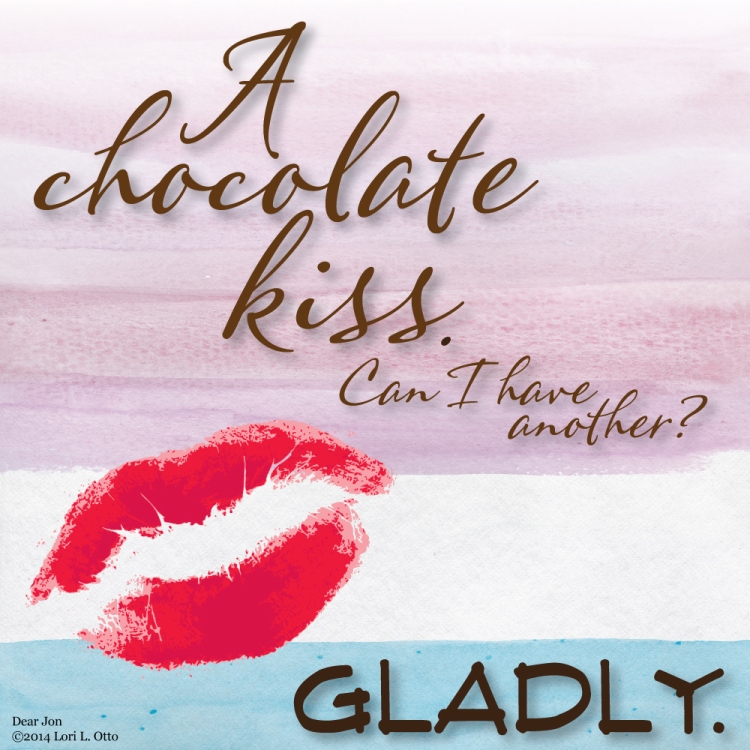 I’m not a big celebrator of Valentine’s Day, for obvious reasons… and I was thinking that I never really include Valentine’s Day in my books, but I realized that Livvy and Jon had a couple in the Choisie series. The one I chose for you is a flashback taken from Dear Jon. If you don’t know about this book, it’s the third one in the Choisie series. Essentially, Livvy is writing Jon letters, reminding him of certain times they were together. In this passage, Livvy’s letters are in the quote boxes, and Jon’s narration is the main text.

I kick off my tennis shoes and push them into the closet before turning off the overhead light and lying down on my bed.  The lamp on the desk illuminates just enough of the room for me to keep reading.

Livvy had been grounded on the romantic holiday after we had fallen asleep together in her bed, so we celebrated two days later.  We renamed the day to commemorate that, as well as to signify it was our second Valentine’s Day together.

It worked out in our favor.  It was much easier to get reservations to a decent restaurant, and it allowed us a full day to celebrate instead of just meeting together on a school night.  It was insufferably cold that day, too, which kept a lot of people at home on a Saturday.

I met her at her house around noon, where she greeted me with a thermos of hot chocolate.  She was bundled up and ready to leave, dressed in a quilted black coat, a flared black skirt, black tights and black knee-high boots laced up with a black bow that tied mid-calf in the back.  Around her neck was a dyed scarf with reds, oranges and pinks.  Her lipstick matched it, as did two tiny barrettes that kept her hair off her face.

“Do you think you’ll be warm enough?” I had asked her, glancing down her body and stopping at her knee, where I could see the hint of a dark freckle through her leggings.

“Don’t worry about me,” she said, then pointed at different articles of clothing.  “Quilted and layered,” she said, “wool and leather.”

I kissed her even though her parents sat in the adjoining living room watching us.  “Your legs are going to be cold,” I whispered.

“We’ll run.”  And after walking for three blocks on the way to MoMA, we did run the rest of the way, even though there were plenty of cabs to take us to the exhibit we’d both wanted to see.  She was happy to be ungrounded, feeling totally free.

I had so much fun with you, recreating the romantic works of art that were on display that weekend.  ‘Couples in Love’ was the perfect collection for us, because I felt so in love that day.

The museum was featuring works of art that celebrated romantic love between two people.  It was a brilliant marketing effort, and I’d heard that, on Valentine’s Day, they had offered candlelight dinners in various parts of the museum to elite members.

It was perfect that most people didn’t want to fight the bitter cold, because it gave us time to enjoy ourselves in public, privately.  The only pictures snapped of us were taken with our cameras: selfies of us kissing, or silly pictures of us as we posed in front of outrageous works of art.

I printed out the one of you by the bronze sculpture, where you were whispering in the ear of the girl statue, talking her out of accepting the obvious proposal of the boy statue on one knee.

I smile, remembering what came next.  “Let me show you how it’s done,” I’d said, then gestured for Olivia to join me by the sculpture.  She posed next to it, mimicking the girl’s surprised expression.  I kneeled down in front of her, and snapped a picture of her, wanting to remember what she’d look like when it came time to propose someday.  I took her hand in mine as she propped up her oversized purse.

“Will you… give me another sip of hot chocolate?  Please?” I’d begged.  She laughed, handing me her bag.  After glancing around to make sure we were alone, I got out the thermos and took a drink of the still-warm beverage.  When I stood up, she had taken off her coat, and was wearing a beautiful flowered top that had the same colors of her scarf with black stripes.  It was form fitting, and after she handed me her coat to carry, I admired her perfect figure momentarily before setting everything I’d been holding on the floor and pulling her into my body.  I kissed her as I imagined the couple in the statue would have kissed after the girl said yes to her suitor.

“A chocolate kiss,” Livvy whispered as she pulled away, licking her lips.  “Can I have another?”

“Gladly,” I had said with my lips already pressed against hers.  We’d kissed deeply until we heard voices approaching.

After I’d told her where we were going for dinner earlier in the week, she had made further arrangements to make sure we had a private area.  One had been set up on the second floor, where there was only room for a table for two on the side of the staircase.  The area was hidden from the rest of the room by a stained glass wall that cast the most beautiful colors on her face as she ate.

She had told me she loved me as we ate dessert.  It was a delicate chocolate mousse that I fed her from across the small table.  The sweet decadence inspired countless more chocolate kisses that night.  I told her that the words ‘I love you’ weren’t enough for me to express my feelings to her.

“I feel everything for you, Olivia,” I’d told her.  “With every ounce of my being, with all my heart and soul, I am full of the greatest affections, passions, and emotions that any man has ever felt for any woman… any time in the history of the world.”

She stood up, putting her napkin in her chair, and held her hand out, palm up.  I took it in mine and joined her next to the table.  We kissed passionately, eventually releasing hands and innocently exploring one another’s bodies with them.  I backed her against the wall, so thankful we’d had a little privacy in that moment because I needed it as much as I needed her.

Realizing where we were–still in a restaurant, even though the waiters had agreed to leave us after we’d paid the tab–we slowed down, eventually leaning against one another breathing heavily, trying to figure out where we could go to be truly alone.

It didn’t happen for us that night.

Purchase links for all the Choisie series books: